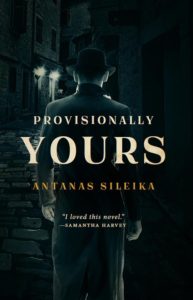 After World War I and the collapse of Czarist Russia, former counterintelligence officer Justas Adamonis returns to Lithuania, a fragment of the shattered Empire. He’s not entirely sure what he’ll find. His parents are dead, he hasn’t seen his sister since she was a teenager, and Kaunas has become the political center of the emerging state. He’s barely off the train when he’s recruited back into service, this time for the nascent government eager to secure his loyalty and experience. Though the administration may be new, its problems are familiar, and Adamonis quickly finds himself ensnared in a dangerous web of political corruption and personal betrayal. Antanas Sileika’s Provisionally Yours is a vivid depiction of realpolitik—as well as an unforgettable story about treachery and the enduring human capacity for love.

Praise for Provisionally Yours

“A perfect calibration of pace and depth, a lucid, stylish and bittersweet chronicle of a country’s rebirth, and a thriller that is also a meditation. I loved this novel.” —Samantha Harvey, Man Booker-nominated author of The Wilderness and The Western Wind

“Offers the delightful unearthing of a little-known corner of the world—post-war Lithuania. Espionage, illicit love, bureaucratic bungling, marvelous descriptions of food and drink, strong women, desperate men. And subtle humour. And ultimately sadness, brought on by amorality in the struggle for power. A fine read.” —David Bergen, Scotiabank Giller Prize-winning author of The Time in Between

“Sileika is a master at portraying moral ambiguity. Set in an overlooked corner of Eastern Europe, Provisionally Yours has the gritty realism of a noir and the pacing of an espionage thriller.” —Nino Ricci, author of the Lives of the Saints trilogy