It was another busy literary week, starting with a lunch on Tuesday at a King Street restaurant called Buca, to celebrate the culling of over 2,000 story entries for the Toronto Star Short Story Contest. I won’t say much about this because the competition is still unfolding, except this – our bleary-eyed judges were glad to pass on the long list and to settle down for a lunch of “salumi”, as the various cured meats are called in this cooler than cool basement. restaurant.

On Wednesday, I launched my novel, Underground, to a room of about 120 people at Ben McNally’s bookstore on Bay. (There will be a bigger launch/reading on April 13 at Harbourfront).

We drank lemon vodka frozen into a block of ice, homemade blackcurrant cassis and Lithuanian beer and ate bacon buns and napoleon cakes.

On Saturday, I was off to London, Ontario, for a Humber School for Writers event in the morning with Joan Barfoot at the London Public Library. We did mini-edits on first pages of writing for about twelve writers and I took 40 pages home for homework, promising to send back my results.

In the afternoon, I did a signing at Chapters in London, and then it was dinner with friends and a nighttime drive home to Toronto at midnight.

Too revved up from the drive to go to bed, I did a few emails and found a new review of Underground from the Vancouver Sun. It was a fine review and a good companion to the Tanqueray Rangpur gin nightcap I took before retiring to bed. 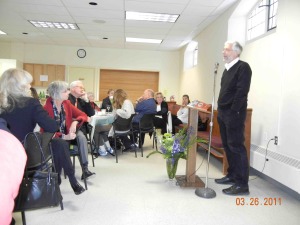 The hard copy of the newspaper has a large sketch of me  labelled “Irresistible”. It’s a page I wish I could send to some of the girls I admired in high school.

To critique the critique, the review does insist that I am not writing humour – it insists a bit too much because I am indeed not writing humour in this novel – it’s about a fight to the death without a lot of laughs, but perhaps some tender moments.

But there is dark humour in the tone, a bit of “what fools these mortals be”.

Where is the writer who will agree wholeheartedly with a critic’s assessment? He also called the novel compelling and layered, and that’s pretty good.