While I am deep in source material from the 1920’s for my current novel, I couldn’t help picking up Keith Lowe’s fascinating new history that sheds more light on the postwar era in Europe. It joins the late Tony Judt, Norman Davies, and Timothy Snyder’s deep and fresh analyses of the postwar period, continuing to dispel the myth that the war ended on May 8, 1945. 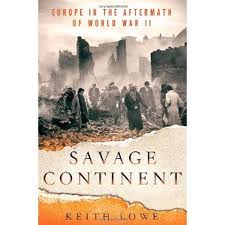 Lowe is particularly interested in the scale of the wreckage cause by the second world war, including the complete destruction of cites such as Warsaw, the subsequent vengeance dealt out to various parties, the wholesale movement of millions of people (causing millions more deaths), the wholesale rape of women, local insurgencies and ongoing local wars that lasted right into the fifties in places such as Greece and Lithuania.

Deaths numbered over 35 million, the same number as the entire population of Poland and close to that of France.

Jew suffered the greatest percentage losses of anyone, and those who survived and returned often found themselves the objects of new local pogroms that caused them to flee. But even before they did, they noted the complete absence of their brethren on their return. It was not unusual for a member of an extended family of dozens to find himself or herself the sole survivor and thus alive in a social vacuum.

Many millions of people were driven out of ancestral homes, most numerously the Germans, who were forced out of Prussia and the Eastern parts of Germany, many, many dying along the way. Much has recently been written about the massive rapes soldiers of the Red Army in occupied territory, so this is not exactly fresh news, but it is put in the context of many other outrages and forced population movements, among them of Poles and Ukrainians. At the end of the war in n much of Europe, women outnumbered men and were doomed to spinsterhood and whole gangs of orphans wandered the continent.

Moral destruction was great in brutalized societies, and famine added edge so that large numbers of women prostituted themselves for something to eat for themselves or their children.

Perceived collaborators were killed or humiliated, women stripped of clothing and beaten. One of them defended herself by declaring that her heart belonged to France, but her vagina belonged to her alone.

The devastation and postwar horror was worse the farther East one went. There, the Germans had considered most of the populations subhuman, and thus there were policies, as Timothy Snyder pointed out, of intentional starvation, which would have been far worse had the Germans won

Interestingly, there is a detailed vignette of the underground postwar resistance in Lithuania, where my last novel, Underground, was set. Lowe describes a pitched battle in Kalniskis between partisans and Reds, where the historical inspiration for Elena in my novel was killed while firing a machine gun. She had previously taken part in the assassination of five communist collaborators in her apartment in Marijampole.

The partisan resistance remains controversial; some polemicists see them as stranded fascists and the 135,000 deported to Siberia in the postwar period as their supporters (an outrageous comment made on a book review page of Ellen Cassady’s book, We Are Here). More seriously, some argued that a war against the Reds and their local collaborators was a hopeless waste of human life, but Lowe says that the memory of that resistance helped spur the drive for independence in the eighties.

To hate one’s neighbours became entirely rational in the postwar era, and our understanding of the war and that time, according to Lowe, is woefully incomplete. Conflicts over race, nationality, and politics went on for months and years after the war. The communists, and to a certain extent the former allies, saw this chaos as an opportunity to push forward their agendas, leading to the cold war.

To quote Lowe, “The immediate postwar period has been routinely neglected, misremembered and misused by all of us.”

But that is changing, and Lowe’s book is one of the spate of new histories that is helping to open up our understanding of what happened during the European war and in its aftermath.