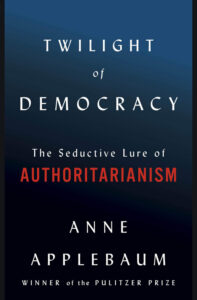 Anne Applebaum’s latest book is a study of her friends and acquaintances who turned over two decades from liberal-minded optimists to supporters of authoritarians such as Viktor Orban in Hungary, Jarolslaw Kaczynski in Poland, and one might say “aspiring” authoritarians such as Boris Johnson and Donald Trump.

These authoritarians project messages of anxiety with the present. They look back to a past they claim to hope to recreate. Their stories deal in nostalgia, anger, resentment and a series of other sentiments that might make them veer into anti-Semitism, anti-immigration, and anti-democracy. Meanwhile, in the population there is a longing for the assuredness of authoritarianism that might lead into a condition named in Applebaum’s title: The Twilight of Democracy.

It struck me as I read this short book, a really personal account of the shifting zeitgeist, that it was a modern version of Czeslaw Milosz’s The Captive Mind. In that book, Milosz described several writers who sold themselves to communism through a need to advance themselves, to seem important, to become public figures.

Aspiring authoritarians are always with us, but their influential supporters, whom Applebaum dubs as clercs, are the ones who take the message to the people and enable the strengthening of their leaders’ authoritarianism.

Of the Polish version she writes:

“Resentment, envy and above all the belief that the ‘system’ is unfair — not just to the country, but to you — these are important sentiments among the nativist ideologues of the Polish right, so much so that it is not easy to pick apart their personal and political motives.”

Varieties of these feelings can be found throughout the west.

All of this rings true to me, and it alerts me to another depressing characteristic among my Canadian and American friends and acquaintances in the time of protest in Belarus against the authoritarian Alexander Lukashenko. Just a few days before this writing, he strutted with a rifle in his hand to show his resistance and disdain for the tens of thousands of anti-authoritarian protesters in Minsk. 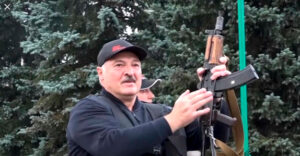 How this will all play out in the long run is uncertain, and I am writing as these events unfold.

The situation in Belarus seems not to be all that important or interesting to them, in particular the ones with knowledge of the region.

Many of my friends were around at the time of the dissolution of the Soviet Union. We looked upon the future then with great hope.

Of course, most futures bring us mixed results, and the fall of the Soviet Union did not bring all the social and economic benefits many in Eastern Europe hoped for.

But it was better for that authoritarian regime to have fallen than for it to have stayed in place.

Yet I sense no swelling support for Belarus. Most people in the west would have a hard time finding it on the map and know even less of its history, even after Svetlana Aleksievich won the Nobel Prize in 2015.

That’s not surprising, because Belarus is “far away”, after all, in the sensibilities of most westerners.

What does surprise me, though, is the relative lack of interest or support for these protesters among some of my friends and acquaintances of East European background. They do know where Belarus is, and they do know what type of authoritarian Lukashenko is.

Is this blasé attitude due to the depression brought on by Covid-19? Is it skepticism due to the mixed results of the Ukrainian Orange Revolutions? Is it disappointment with the sad demographic decline in Eastern Europe three decades after the collapse of the Soviet Union?

I’m not sure. But one thing is irrefutable – the fight has gone out of some people. The hope for a more democratic world has evaporated. Problems at home are serious, of course, but now they completely overshadow international concerns at a time when we cannot easily travel.

This is an old condition, recognized decades ago by William Butler Yeats in his now-famous lines from his poem. The Second Coming:

Turning and turning in the widening gyre

The falcon cannot hear the falconer;

Mere anarchy is loosed upon the world,

The blood-dimmed tide is loosed, and everywhere

The ceremony of innocence is drowned;

The best lack all conviction, while the worst

Are full of passionate intensity.

If the best do indeed lack all conviction, then we are surely in the Twilight of Democracy that Anne Applebaum describes.