How many people does it take to write a book? At my count, 43.

Maybe the high number has something to do with writing historical fiction, because I found myself relying repeatedly on the kindness of strangers.

For example, when I walked into a partisan museum in Marijampole in 2008, I found Justinas Sajauskas studying the Luksa partisan memoir, a classic of the genre. When I asked him why there were no photos of the partisan code-named Lakstingala, the man who survived the ambush that killed Luksa in1951, Sajauskas reached into a drawer, pulled out a stack of photos, and offered me one to take home.

Then he did much better. In 1944, a female partisan code-named Pusele invited a group of communists to come to her engagement party. Then, she and her “fiancé”, code-named Mazvydas, shot dead all the guests and escaped into the underground. Both eventually died in firefights with chekist troops.

This historical scene is re-imagined in the first chapter of my forthcoming novel, and much of the atmosphere of that chapter exists thanks to Sajauskas, who walked me out into the town to the house near the train station where the events occurred. We discussed details such as the route the partisans took to get to a sled to whisk them away to safety.

Sajauskas is only one of the 43. In future posts, I’ll mention what some of the others did.

It’s remarkable to me how much people will help you if you just ask.

Below are a couple of photos of the house where the killings took place on the second floor. 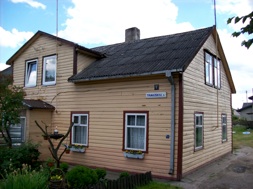 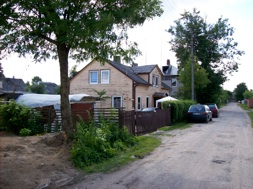