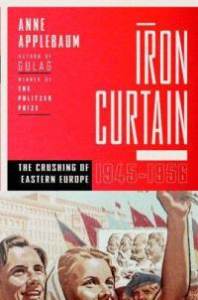 Anne Applebaum was in Toronto recently to speak about her excellent new book in a Donner Lecture series. Keith Lowe, in his Savage Continent, predicted that there is far more to understand about the destruction in Eastern Europe, and now, months after that statement, we have Applebaum’s book, covering some of the same territory as Lowe and to a certain extent, that of Timothy Snyder and Tony Judt before her.

The great strength of this history is the detailed description of how the communists functioned to destroy civil society in the lands they occupied, flying in Soviet-trained specialists to take control of local radio stations first. Stalin had a sense that radio was the most important tool in taking control of a country, but it was only a first step.

The war had habituated the occupied territories to violence. In Poland, whole buildings of inhabitants were arrested. In Hungary, a man pulling his two children in a cart was arrested and the children left on the street.

Czeslaw Milosz is often quoted on this matter of violence: “The man in the East cannot take Americans (or other westerners) seriously because they have not undergone the same experiences. Their resultant lack of imagination is appalling.”

What Milosz meant was that in the East, one turned away from signs of violence and distress to preserve oneself, while those in the West could not understand the lack of empathy that might stop a man from going to the aid of another being treated unjustly.

The violence of the war had left a vacuum, and into this vacuum came the communists, first with their army and then control of the radio. Some enthusiasts saw this as a good thing, if only because it brought order.

Applebaum says the red army’s arrival is rarely remembered as pure liberation  – it is remembered as the beginning of a new occupation. I imagine that could not have been true for Jews, for whom the Soviets were the only hope of liberation in the East, no matter how bad their regime. At least they were not bent on the annihilation of a whole people. The Reds also freed non-Jewish prisoners in camps such as Stutthof.

But the rapacity of the Red army has been documented thoroughly, and Alpplebaum reminds us that in the iconic photo of a Soviet soldier raising a red flag above the Berlin Reichstag, the photo needed to be doctored to hide the several watches the soldiers were wearing on their arms.

Chillingly, Moscow viewed all inhabitants of the new Western territories as potential subversives, so the vice of repression was applied slowly, but relentlessly.

Among banned groups were hiking clubs and charities. The intention was to create a new type of person who was not even capable of imagining alternatives to the Soviet model.

Interestingly, Applebaum raises the question of why more people did not resist. I do wonder if this isn’t a slight application of Milosz’s claim that Westerners cannot understand (although Applebaum is practically an Easterner). Of course one does not resist when the price of resistance is so high. She does mention that resistance (and repression) carried on more intensively in the Baltics and Ukraine, but these areas are outside the scope of her book, which focuses on Poland, East Germany, and Hungary.

Sadly, I might add. These forgotten Baltic and other countries were covered to a certain extent by Timothy Snyder in Bloodlands, but they are difficult for most Westerners to understand because they did not have country status after the war. They were absorbed right into the Soviet Union. Their histories remain absorbed to this day. The multilingual Timothy Snyder explained that Lithuanian is too hard to learn (to say nothing of Estonian and Latvian) and as a result, histories of these places have not been written from the point of view of the west.

Applebaum gives plenty of detail in her work about the erasure of civil society (and even the reduction of free time, which now had to be devoted to partry-approved lectures, memorials, and marches). But the happy ending, if one can call it that, is that resistance remained muted, but present, at least in people’s minds, and it became active as Soviet power began to diminish due to the failure of communist economics.

The reaction to Applebaum’s book has been interesting. Timothy Snyder was praised by most reviewers, but as Adam Gopnik pointed out in an article in The New Yorker, some people were offended by his book because it could be used by ultraconservatives to diminish the importance of the narrative of the Holocaust. Snyder has denied this and claimed he simply lays out the facts of what happened. But in extremist circles I have heard echoes from, Snyder’s work was called “disgraceful”.

In these various blog posts, I have discussed the idea of multiple narratives coming out of WW2 and the postwar era, but instead a kind of war of narratives has gone on. I still see claims that attempts to document the crimes of the Soviets are a cover to mask the crimes of Nazis and their collaborators. But when I approached Applebaum after the talk, and asked her about this claim, she said it has now become a “fringe view”.

We do tend to look at these stories from a point of view or fixed position, if we have one. Most westerners do not because they are ignorant of what happened in the East, but even so, the New Yorker review of Applebaum’s book is an example of argument from a position.

One of reviewer Louis Menand’s main questions is whether the United States could have done something about the crimes of the Soviets.

Unrealistic though the proposition may have been, most in the East thought so. The lack of interest in the West is still known as “the great betrayal”.

Menand is interested in the belief that Stalin had no grand plans to invade the west and the Soviet military might was often exaggerated by the United States. A subtext here is that the right-wingers in the West were exaggerating for their own motives. He also ads that Soviets really believed in their ideology, but can that be any sort of excuse? The Nazis believed in their ideology too.

Menand also says that USA could not do anything in any case, and that its goal was to destroy Germany, not save Poland.

But Poland did have treaties with England and France. What were their responsibilities?

To his credit, Menand adds that Alpplebaum has depicted the human price. And what a human price!

When it comes to history, God is in the details. Alpplebaum has laid out the details in a book less horrific than Timothy Snyder’s but no less illuminating.