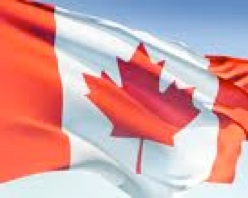 It’s as quiet this windy afternoon as a Sunday of my childhood, when Toronto used to close down tightly for the Sabbath. It’s all silent streets because everybody seems to have left my part of town for the countryside for the long weekend, but there’s a flutter of the odd Canadian flag; we never used to hang out the flag. We left that to the more patriotic Americans, but more and more flags have been going up in recent years, especially since our deployment in Afghanistan.

Mentally, I’m still somewhere in the mid-Atlantic, a little stunned with jet lag after the hectic couple of weeks in Lithuania.

There were no objections to my novel at all, just enthusiastic endorsement – it was almost too good to be true. Around 250 people were in the audience for the presentation of the novel, a mixture of academics and artistic types. The publisher brought along 60 copies and sold out totally – the people were asking for more. Leonidas Donskis’s questions were brilliant – I knew I was in good hands. My own publisher was enthusiastic and another publisher who had declined the translation came over to express his regret at the error.

I also managed to do a lot of research toward my next novel, set in Kaunas, and was helped by Vilma Akmenyte and Arunas Antanaitis, who walked me around the town and gave me the historical context for the novel, which will be set between 1921- 1923. We were lucky to see a new show at the former presidential palace museum in the company of the former president of Lithuania, Valdas Adamkus and his wife. He happened to be at the conference I atended later as well.

VDU, the university in Kaunas asked me to go over in 2010/2011 in order to teach creative writing for a week – I’m ambivalent because my skills are so closely tied to the English language.

Now I’m back here and just going into my novel, Underground, for one more pass after a third set of editing notes from Janice Zawerbny. Janice is great to work with. We can be very intense on the text, but when we take a break, the conversation on literature branches out into many directions, any one of which might be worth a glass or two of cognac and a cup of coffee.

Just this afternoon, I worked hard on the first chapter and found at least a dozen places to make improvements in phrasing. These tiny touch-ups function, I hope, to reduce the friction, taking the reader forward effortlessly, employing what Tim O’Brien called “forward tilt”.

My own summer writing workshop starts in a week at the Humber School for Writers, so I don’t think I’ll get very far in rewrites before then.

While I was in Lithuania, I read Timothy Snyder’s excellent review  (in the New York Review of Books) of new volumes on Poland and the Holocaust – the review is called “Jews, Poles & Nazis: the Terrible History.”

There is much in the article that is germane to Lithuania.  My son sent me new articles about the holocaust in the Baltics, and the brilliant Lithuania poet, Tomas Venclova, addressed the issue at the conference I attended.

More on this subject in my next entry.