Anyone with an Eastern European background, specifically Polish, Baltic, Byelorussian, or Ukrainian, can let out a sigh of relief now that Timothy Snyder’s new history of WW 2, Bloodlands, has been published. This is not to say that it lets those peoples off the hook for crimes committed on their lands. It does show how much greater the savagery of that war and the holocaust was experienced in those territories.

Furthermore, it shows some of the places where one had no chance to take moral action, places such as Byelorussia (Belarus) where a man might just as easily be dragooned into the anti-Nazi partisans as into the anti-partisan Nazi police or even into Nazi slave labour. As for the wives and children of these men, they were often shot to reduce the number of mouths that needed feeding.

Yet hardly anyone I know here in Canada is really clear where Byelorussia is. I’ve had to do explain it again and again. 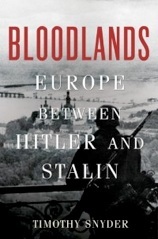 Snyder starts off earlier than most historians of the war, beginning with Stalin’s famine in Ukraine. While this famine has been known about for some time, one still hears apologists calling it a regrettable bureaucratic error. Not so Snyder. He points out that Ukrainian famine was caused by a conscious decision fully understood by Stalin. He also lays out the brutality of that act in moving passages such as this one:

… families kill their weakest members, usually children, and use the meat for eating …

In a further twist, Stalin and his henchmen came to believe that those who were starving were showing some form of resistance to the regime, and were therefore doubly guilty.

Snyder’s central thesis is that Hitler and Stalin enabled one another’s atrocities. The Molotov-Ribbentrop pact, which divided Eastern Europe into spheres of influence, permitted Stalin to begin his arrests of the local intelligence in the East and it permitted the Nazis to begin killing Poles to make way for German settlers.

When the accord fell apart due to Hitler’ attack,  brutality fed brutality. Here is what the New York Review of Books had to say:

In some cases, the atrocities carried out by one power eased the way for the other. When the Nazis marched into western Belarus, Ukraine, and the Baltic states in 1941, they entered a region from which the Soviet secret police had deported hundreds of thousands of people in the previous few months, and shot thousands of prisoners in the previous few days. The conquering Germans were thus welcomed by some as “liberators” who might save the population from a genuinely murderous regime. They were also able to mobilize popular anger at these recent atrocities, and in some places to direct some of that anger at local Jews who had, in the public imagination—and sometimes in reality—collaborated with the Soviet Union. It is no accident that the acceleration of the Holocaust occurred at precisely this moment.

Then things got worse. More on this in coming posts, but before that, a little more form the New York Review of Books’ take on these revelations:

For different reasons, the American popular memory of World War II is also due for some revision. In the past, we have sometimes described this as the “good war,” at least when contrasted to the morally ambiguous wars that followed. At some level this is understandable: we did fight for human rights in Germany and Japan, we did leave democratic German and Japanese regimes in our wake, and we should be proud of having done so. But it is also true that while we were fighting for democracy and human rights in the lands of Western Europe, we ignored and then forgot what happened further east.

As a result, we liberated one half of Europe at the cost of enslaving the other half for fifty years. We really did win the war against one genocidal dictator with the help of another. There was a happy end for us, but not for everybody.