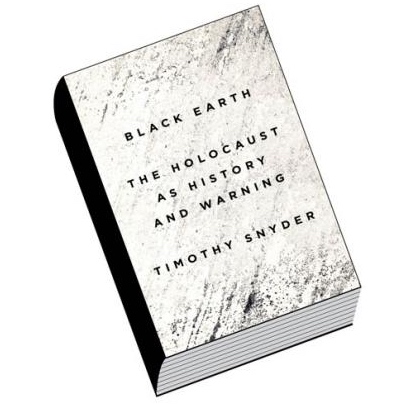 One of his theses is that The Holocaust in the popular imagination is situated in Auschwitz, but he contends that that place gives an incomplete view since most of the Jews who died did so in the territory he has earlier called the “Bloodlands,”  the places where Nazi and Communist regimes overlapped. In those places, Jews were often from lower social strata and they left no memoirs – most of them took bullets and died without leaving records of their suffering.

Snyder states further that these people were first made stateless, and this act made them unprotected by the rights and laws of citizenship. The warning in the title consists of the thesis that this type of stripping of rights might be used again in the future.

My fascination with the book came with the capsule descriptions of prewar places like Lithuania, which I know, and like Hungary and others, which I do not. In every place where states were destroyed, the Jews fared worse than in places such as Holland, where the prewar state retained some control.

Snyder goes into great detail about the history of Poland in the period.

Further, he analyzes Hitler’s writing to understand his world view, and then shows how that vicious world view was imposed on conquered nations.

As I have written elsewhere, the story of the war and The Holocaust contain narratives in collision. The Soviets are heroes to some and murderous tyrants to others.

I was particularly surprised by Adam Gopnik’s review in the New Yorker, in which he stated that no historian believed the cliches about Eastern Europeans. That might  be true of historians, but it is not true of the population at large.

Most people I know do not read much history, and what they do know is largely based on Hollywood movies. Yet everyone seems to have an opinion. Snyder’s latest book, and there are now many others, is a welcome explanation, by no means definitive,  of a tragedy for those whose knowledge of the war is limited to Inglourious Bastards and Saving Private Ryan, and their knowledge of The Holocaust limited to Schindler’s List.

But I despair of many learning anything better. When it comes to this book, several people I know, intellectuals all, have questioned its thesis, but none of them seems to have read it.

Here is a link to a very good recent interview with Timothy Snyder on the TVO.