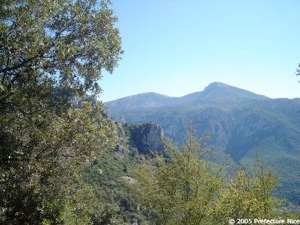 In this second chapter removed from the novel, Lukas and Monika, their relationship deepening, walk further up the mountain as a storm threatens.

By the following morning, Lukas’s foot, though still tender, could take some weight, so taking a stick for support, Lukas and Monika set out to go a little further along the path that circled the mountain. Their daypacks were light and Lukas felt good to be moving again, however gingerly. The day was bright, but very windy; on the pasture below their hut, the sheep were already grazing, white flecks drifting away from the still figure of the shepherd.

After a while, the path veered sharply up the slope of the mountain in a zigzag. It was harder to walk than Lukas had imagined, especially where the pasture thinned to patches of loose stones underfoot.

The new vista that opened up as they curved around the mountain had many more snow-capped mountains and forested slopes. Lukas had to stop to rest, and they sat on a stone big enough to hold both of them side by side. Monika looked at his face.

“You foot is hurting badly,” she said.

“What choice do I have?”

“You could tell me about your pain. I wouldn’t mind.”

“It wouldn’t do any good though, would it?”

“It might. Two can bear pain more easily than one.”

Lukas was touched by her words, but he could not linger on the sentiment. To open up his heart would bring on the unbearable memory of what he had left behind.

“I should have waited one more day before going out on the mountain,” he said. “I don’t know how I’ll get back down the incline we just came up.”

They walked on, the going somewhat easier now, but by the time they saw a farmhouse, his foot was throbbing and the high wind was beginning to push together the clouds. The house on the slope was wood and stucco with a tile roof, the animals living under the lower level and the humans up above. A rutted track led away to a pair of houses another kilometer away along the slope.

The farm dogs came bounding out at them, barking and wary, but the dogs did not snap and were called off by a woman at the open door who beckoned them in. It was a working couple’s house, with few ornaments, almost a bachelor’s house, with tools on one end of the kitchen table, newspapers stacked high on a chair, a collection of walking sticks and umbrellas in a stand and the smell of cheese in the air. There was no sign of children.

The farm wife, lean and preoccupied, but otherwise friendly enough, invited them to come in and sit down, watching Lukas limp up the stairs. She made coffee for them and sliced bread and cheese and sat with them for a while at the kitchen table by a window.

Outside, the sky was turning dark. She said she would have to go out to help her husband, who was in a field with the sheep, to bring them in against the storm. But before she did, she asked about Lukas’s foot. She had him remove his shoe and sock. She studied the swollen ankle and made up a poultice, which she wrapped against his skin. Then she finally went out under the darkening sky.

“She’s a kind woman,” said Monika who had grown up in the city and was amazed at the generosity of country people.

“This is how they were in Lithuania too,” said Lukas. “At the beginning, anyway. As the years passed, they became wary of us. They didn’t have much food of their own and the Chekists were terrorizing them. Sometimes, I could only get bread at gun point.”

“And how do you think things will have changed while you were gone?”

“Nothing has gotten better, so they will probably have gotten worse.”

Monika stared into her cup. “Sometimes I’m sorry I put you in touch with the SDECE.”

Lukas looked at her searchingly, but she did not meet his eyes. “If it wasn’t for them, I wouldn’t be in France in the first place and I wouldn’t be here, with you.”

“But if it wasn’t for them, you might be able to live a normal life. A sane life.”

He covered her hands with his, but she still would not look up at him. Outside, the storm was breaking, large, infrequent drops splattering against the panes.

“They don’t seem to be in any hurry to send me back to Lithuania, but if they did, it would be hard for me to go back now. I’ve fallen in love with you.”

She looked up suddenly at this, her eyes alive with hope. “Then don’t go back. Why should you be the one who has to return? Everyone else who got out is looking to America or Australia. Why shouldn’t you?”

“I said I wasn’t eager to go back, but I still have to do it. What about the ones I left behind?”

“It’s their bad luck. And it’s your good luck that we found each other. What were the chances of things turning out like this when I met you in Germany? We’ve had incredible good fortune. Let’s not throw it away.”

“What are you saying?”

“If you do love me, let’s find a life somewhere, maybe in Paris, maybe somewhere else. Leave the SDECE.”

“I just joined! You’re the one who got me in in the first place. And anyway, they seem to move so slowly. At this rate, it’ll be years before they send me back.”

“Or they might send you back tomorrow. You can’t be sure. You need to disentangle yourself.”

“Let’s not talk this way. Do you have any idea how many people died to get me here? There’s a trail of blood all the way across Lithuania and Poland, and what am I supposed to do, just forget about those people and live a private life? The ones I left behind sent me here with a mission.”

Monika shook her head and looked outside.

“Such patriotic talk,” she said bitterly. “Look at where all the European patriotisms have gotten us. Don’t you think that you, personally, have given enough already? Don’t you think there’s an upper limit to what you’re supposed to give?”

“And what about love? Don’t you believe in love?”

“I do believe in love. I love you so much that I’d marry you, if you’d be willing to take someone like me, even if it’s just for a while.”

“I’d marry you. I’d take you. It’s better to seize some moments of happiness than have none at all.”

The storm was blowing strongly outside, but above it they could hear the bleating of the approaching sheep and then the banging of doors as the pens were opened down below. After a while, the farm wife came in with her husband, and they threw off their oilskin capes. Outside, the rain was pouring down on an angle, borne by the wind. Lukas rose, but the man signaled them to sit, and he and his wife went to a bedroom to change out of their wet clothes.

It was awkward to speak with other people in the house, and each of them sat stunned by the admissions they had made.

“You don’t need to accept my proposal,” Lukas whispered. “I understand that I’m a poor prospect, a kind of condemned man. You’d be a fool to take me.”

“I am a fool, a very great fool, and I will take you,” she whispered.

The farmer was no less lean and no less friendly than his wife, and philosophical as well. As the rain lashed the fields outside and made the window in front of them rattle in the wind, he brought out a bottle of marc de mirabelle, a plum eau de vie, and they sipped their way through it as his wife prepared cheese omelets for each of them.

“Are you Germans?” the man asked over coffee.

“No. Lithuanians,” said Monika. Her French was the better of the two.

“I’ve never heard of such a place. Are you sure you’re not Germans?”

“No. Our country is near Poland. Do you bear a grudge against the Germans?”

“I didn’t lose anyone to the them. I was lucky. But not everyone else has forgiven them.”

“I’ve been in Germany,” said Lukas. “It’s like hell there. No one has any money and the cities are still in ruins. It will take a while before they come here as tourists.”

“I still don’t understand this place you come from. I’ll bring a map.”

He went to the next room and dug around, finally coming back with an Atlas that was fifty years old. When Tomas pointed out where Lithuania was, the farmer clapped him on the shoulder.

“Russians! Why didn’t you say so? You were our allies during the war.”

The rain stopped but the sky did not clear, and the farm wife advised against Lukas’s picking his way back down the mountain in the mist on a swollen foot. Better that her husband should return alone to get their belongings from the hut. He could take them both out by cart the following day to a village where the bus came daily.

“You are engaged, aren’t you?” the wife asked them after her husband had gone out.

She was as good as her word. Lukas and Monika slept together that night on a feather mattress with a down blanket, awaking in the dark just before dawn to the sound of the sheep being let out for the day.

“Are you awake?” Monika whispered.

He reached for her in the cocoon of warmth under the down comforter.They made love in the morning before breakfast, and then rose for the day.