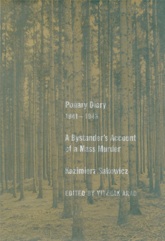 Ponary Diary is a chronicle of the relentless shooting, primarily of Jews, in pits in a forest outside Vilnius in the years 1941 – 1943 as witnessed by a Pole who lived nearby. The executioners were overseen by Germans, but the actual shooters were usually Lithuanians.

Kazimierz Sakowicz was a journalist living in reduced circumstances, a man who moved to the outskirts of Vilnius where he began to record in great detail the goings on outside his front door.

These included the regular arrival of truckloads of prisoners, many of whom were beaten and then stripped and shot and dumped into the pits. But the dumping soon became too hard, so the victims were forced to step down into the pits and arrange themselves neatly before they were shot.

The grotesqueries are many: A local dog and ravens feast on the imperfectly buried remains; wounded victims awaken and crawl out of the pits, but are usually caught; eventually, lye is poured on the bodies to make the wounded move so they can be identified and killed before they climb out; some victims are taken aside and told they will be saved if they betray hiding places of others – then the betrayers are killed; one speculator in used clothing kills a woman of about the same size as a potential customer in order get a dress, and then cannot understand the qualms of the buyer.

Sakowicz himself did not survive the war, but was murdered under mysterious circumstances while riding his bicycle on a nearby road.

As I have mentioned in some of my other posts, the level of suffering in the East was very great, and many groups suffered in different ways. Anyone who wants his suffering to be known should know of the suffering of others. Thus anyone writing bout the hardships of the Lithuanians must also look squarely into the face of the holocaust in Lithuania and take accept responsibility where it is due.

But this sort of reading is very hard –  my dreams were full of it for two nights. Reading this chronicle of systematic murder was as relentlessly boring as observing any industrial process, and all the more monstrous for that.