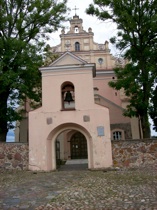 I never intended to write quite so much about Lithuania as I do, but when the Soviet Union collapsed almost twenty years ago, the archives in the country opened up, and enterprising young historians began to tell about things we had never heard of before, or had only heard rumours about, or had heard about in a twisted, deformed manner.

The material was often quirky, tragic, or surreal.

Take the church above. Built in 1648 in a town called Merkine,  at the confluence of the Nemunas and Merkys rivers, it is picturesque enough, a counterpoint to the bright yellow former orthodox church and the red brick former synagogue found in the same town.

In December of 1945, Merkine was seized by the partisans under the leadership of Adolfas Ramanauskas, known as Vanagas (The Hawk), and held for one day while bloody mini-battles were fought in various neighbourhoods.

The plan had been betrayed, and the MVD had prepared various strong points, including the bell tower of this church, which held a machine gunner who had an excellent vantage point over the town.

The partisans suffered several dead due to this machine gunner, but they would not fire back because they considered it immoral to fire at a church.

I cringe at this attitude – after all, it’s almost quaint –  but it underlines how there was a fight between systems of values.  These were men who rather die than give up what they believed in.

The 41 men from the battle whom Vanagas remembered well enough to name had all died in other battles by the time he wrote about them in the fifties. Vangas himself was betrayed in 1955, interrogated, tortured, and executed in 1956.