I sat in a bunker in 2008 with one of the last surviving partisans from the South of Lithuania, Juozas Jakavonis, as he told me the story of how he missed the battle of Merkine and survived.

In 1945, he found an open prayer book floating in the river near Merkine and brought it to his superior, Adolfas Ramanauskas. The prayer book belonged to three partisans who had been ambushed and killed, and Ramanauskas wanted to strike back at the Chekists and their supporters to avenge the three dead partisans. Ramanauskas launched the famous battle of Merkine, in which the partisans seized the city and held it for a day, suffering high losses from a machine gun nest placed in the church steeple (see my second entry in the archive – The Machine Gun Nest – January 23, 2010).

But Juozas Jakavonis, code-named Tigras, was not one of them. For breaking a minor rule, he was punished by not being permitted to take part in the attack.

Jakavonis had great luck. He was captured when jumping out of a farmhouse window, but because he had no uniform or arms at the time, and because he had no other incriminating documents, he was sentenced to only fifteen years in the gulag. While there, he met his future wife, Zose.

While the gulag was potentially fatal, he would have been much worse off had he stayed behind. By 1948, when Ramanauskas wrote up his memoir of the attack on the town of Merkine, all partisans whose names he remembered were dead.

In my novel, Jakavonis’s discovery is transferred to a wandering cobbler. The actual battle of Merkine is depicted in an early chapter of the novel.

Jakavonis was a bright a cheery man when I met him in 2008, standing in front of his yellow farmhouse with his wife and granddaughter. His wife complained that their cow produced too much milk for a pair of pensioners, even if she gave away a lot of cheese and butter. She drew the water for our tea from a well with a wooden lid and Jakavonis and I went down to the reconstructed bunker where Ramanauskas and other legendary partisans had once spent months. 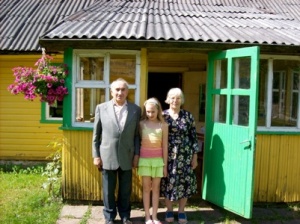 Even a simulated bunker like the one we sat in, with a roof slightly above ground, felt damp and stank of mold. The rusty oil lamp and typewriter were relics of the postwar era.

Jakavonis knew the stories of marginal players in the postwar partisan story, in particular a pair of drunken forgers, a husband and wife team who made it into my novel. Jakavonis suspected them of being spies.

First we talked about the partisans, and then inside the house, over homemade bread, cheese, and butter as well as many drinks, he told stories of the German occupation, of a wounded German soldier who walked back to Germany after the Soviet victory, of various partisan forays.

Writers are taught to be suspicious of happy endings. Jakavonis seemed too perfect, an old man honoured at last, living in a peaceful land with more milk from his cow than his wife knew what to do with.

But for every Jakavonis, there were hundreds if not thousands of others whose ends were not so happy, even if they did manage to survive. The names of around eighty of his comrades in arms are etched in the stone of the partisan memorial just outside the town.