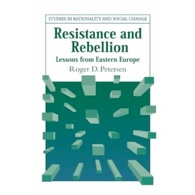 What drives a man or woman into the Underground? Roger D Petersen, Associate Professor of Political Science at MIT, studied the motivations and social support for resistance in his 2001 book, Resistance and Rebellion.

He tried to understand why, in his words, “… ordinary men and women, in the face of enormous risks, resist and sometimes violently rebel against powerful regimes.”

He studied the village of Svainikai in southern Lithuania, and pulled apart the strands of social support for the young men who had gone into the forests to fight the Soviets.

As Petersen tells it, much of the motivation was the chekist (KGB) massacre of villagers, particularly in Klepociai, where twenty-one of thirty-two houses were burned and twelve people killed on December 23, 1944. The inhabitants of other villages did not know who would be next.

A wave of chekist shootings, burnings, and interrogations under torture drove many young people into the forest, initially to hide and eventually, in many cases, to take up active resistance.

This study is particularly useful because it puts paid to the notion of anti-Soviet resistance as pro-fascist.

Why did the chekists perpetrate the massacre in the first place? The answer is not certain, but it may have been due to local resistance against Soviet partisans who demanded support. Thus the farmers, tied to their land, were in the unenviable position of having to choose between two armies and two types of partisans. One wonders why a farmer would ever support the Soviets, whose plan called for the expropriation of the farmers’ land.

Petersen’s book caused a prolonged shudder in me. Who can understand why one generation or another, in one geographical position or another, must be faced with a series of impossible choices? Here, in our safe haven, it’s easy to judge the players of the past, to take the moral high ground. But we’re lucky not to have face the same sorts of dilemmas.