The Melancholy Town of Merkine intrigued me from the very first time I visited it back in 1989, when I arrived at dusk one winter’s night to interview a priest who had worked for the KGB. I felt as if I had stepped back in time, parked on a grassy knoll by an ancient church in a small town with wooden houses and picket fences and dogs that barked on the sandy streets.

Ghosts are somewhat common in Lithuania, and I felt their presence even then, although I didn’t yet know the hill town where the Merkys and Nemunas rivers meet had been inhabited for twelve thousand years. Instead of knowledge, I had intuition, and the sense of the place stayed with me as I mythologized the memory of the town and called it “Merdine” in my novel, Woman in Bronze. That was a kind of joke, for “merdeti” in Lithuanian means “to stagnate” and the word bears a close relationship to the French word, “merde”.

I didn’t have a chance to visit the town again until eighteen years later, in 2007, when I went there to retrace the footsteps of the partisans who had seized the town for a day in 1945.

But before that, I read up on the place and discovered it had once been an important city, with four posts marking its perimeter. Of these four brick posts, two remain, and they are deep in the fields, showing how dramatically the town has shrunk since the middle ages. It has suffered terribly from the burning of its caste by the Teutonic knights in the fourteenth century, by the Russians in the Northern Wars, and more recently during WW 2 when most of the town was burned down and the Jews were annihilated. In the past, Merkine had many more times the current population of fifteen hundred.

The mound where the old hill castle stood has a spectacular view over the loop in the Nemunas, and a strange little stream runs down from the top of the hill. 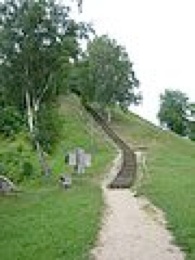 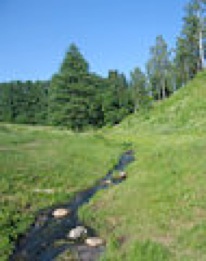 My old friends, Jonas Jurasas and Ausra Sluckaite-Jurasas have a summer house nearby, and I sat there on their back porch as the sun set in the summer of 2009. Fishermen were on the banks in the evening mist, the odd splash the sound of their occasional success. Down beneath me in the garden was a big anchor form the period when this had been a major shipping route.

Beside us that night, as we drank rather a lot of Trejos Devynerios, a bitter liquor, were a pair of Lithuanian TV producers who had done a twelve-part series on the major Lithuanian artist of the early twentieth century, Ciurlionis. One of them was the wonderful TV producer, Liudvika Pociūniene, whose father is a prominent sculptor (I sat in their orchard under an apple tree, talking about art a couple of days later). Jonas Jurasas had produced an opera in Traku Castle earlier that year.

The conversation was compelling because this is a place where culture still matters, but the melancholy of the place underscored everything. Jonas and his wife had been expelled form the USSR in the seventies because of a bloody production of Macbeth that was seen as an attack on the regime. Liudvikas’s late husband had been an investigator for the Lithuanian government who died under mysterious circumstances in Byelorussia.

And of course, the town had once been full of Jews, now all dead, perhaps a few survivors’ children alive somewhere far away.

The next day, Jonas and Ausra took me to a small lake in the middle of the forest where we swam out, and even pushed around a tiny island the size of a dinner table – a floating island.

The small lake, not much more than a pond, is called “Bedugne” in Lithuanian, “Bottomless” in English.

There are depths to be plumbed in this place. I know I’ll have to go back.