The Genocide Museum in Vilnius is a grim memorial housed in the former KGB headquarters on Gedimino Prospektas in Vilnius.  The names of many of the people murdered inside are etched on the stones on the outside of the building, as pictured below. 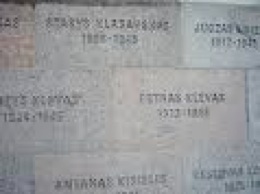 This museum houses brilliant and comprehensive displays of the incorporation of Lithuania into the Soviet Union in 1939 and the system of incarceration, torture, murder, and deportation that was used from that period right into the fifties. Some of the partisans I write about in my novel, Underground, were housed here for interrogation, torture, and execution.

So why is this place controversial?

It has been attacked because of its name. Can one appropriate this term, “genocide”  for what the Soviets did in Lithuania? Those who oppose the name say that the Soviets never intended to exterminate the Lithuanians, so their activities were not properly “genocide”. Furthermore, those who have issues with Lithuania claim it is a cover to mask Lithuanian crimes in the holocaust.

However, some Lithuanians point to Latvia, which barely has a Latvian ethnic majority now to demonstratee that the Soviets did indeed plan to exterminate or at least overwhelm and incorporate the Baltic States.  They add that everyone knows about the holocaust now, but very few people know about what happened under Soviet terror.

I can’t say I am comfortable with the name of the museum myself, but I will say this:

When I worked in an SLS writing seminar in Vilnius in the summer of 2009, virtually none of the fifty-odd students knew the story being told in the Genocide museum.  They did know the about the holocaust in Lithuania and learned more by visiting the chilling sites in places such as Paneriai on the outskirts of Vilnius and the Ninth Fort just outside Kaunas, just two of the major sites where tens of thousands of Jews were slaughtered by Nazis and Lithuanian collaborators.

The narrative being told in the Genocide museum is not the story of the holocaust, but it is critical to our understanding of Europe and WW2, which we view, naturally enough, through a Western lenses, and which we imagined ended in May of 1945 with the surrender of Germany.

But in the East, The Soviets were considered invaders too, and fighting went on against them for several years, intense at first, but continuing sporadically into the fifties.

But why should one narrative usurp another? Why do we have narratives in collision?

Not as much, I should add. No one tried to wipe the Lithuanians off the map as they tried to do to the Jews.

I use the word “collaborators” above advisedly, applying it to both groups, usage which might be as controversial as the name of the museum.

These issues keep coming up again and again as I follow current developments in our understanding of the war in the East. I don’t think the narratives need to collide. The horror was complex, and worse for some than for others.

I think all the stories need to be told.

As for the museum, I think it’s great, but I do wish it was called something else.