In the other part of my life, I run the Humber School for Writers, and over on that side, I blog weekly about creative writing and sometimes about other writers.

I don’t talk much about creative writing matters here, but occasionally, the two worlds do run into one another, or overlap, and let’s face it, total compartmentalization just isn’t possible, so this week, I’d like to talk a bit about the late Paul Quarrington, a writer who worked for me at the school. He died while I was out of the country  (and that explains why there was no blog last week).

He was a good writer, a good musician, and a good friend:

Here’s what I said to the National Post about him:

Paul Quarrington was a man’s man, somewhat restrained in giving praise, and uneasy in getting it. But you could always count on him – I believe the old song, “Stand by Me” summed him up pretty well.

As a poker player, he was aggressive in a friendly way and therefore fun to play against.

As a cook he redefined the meaning of “man size.” He would make a mountain of chicken wings that lay higher than eye level if you were sitting at a table with him.

As a writer he was eclectic, interested in everything, from card tricks to storm chasers, from fishing to hockey to rock and roll.

He knew how to squeeze enjoyment out of life. When we arrived in Siena late one night before a writing workshop, we were sitting out on the square under a half moon, and when I asked him what wine to order he said this: “Look around you. You’re in paradise. Order the best wine you can afford.”

At that same workshop, I was solo but he was with a girlfriend, and they took me under their wings. Along with the writer Joe Fiorito and his wife, Susan Mahoney, we bought bottles of grappa to drink in the back of a van as we drove through the Tuscan hills, singing doo-wop songs.

People wanted to be around Paul. He attracted them, whether they were poker players, hockey players, musicians, women, or waiters in restaurants. He had vitality, life force, and his loss takes away a little of that life force from all of us who were privileged to share moments of life with him. 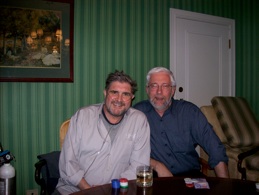