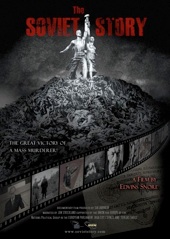 This recent documentary film by the Latvian director, Edvins Snore makes me simultaneously pleased and uneasy.

Using archival footage and commentary by experts such as Norman Davies and Vladimir Bukovsky, it draws parallels between the Soviets and the Nazis, demonstrating that their systems emulated one another and learned from one another.

Snore states that the West has forgotten or never known about the crimes of the Soviet system and that Soviet war criminals have gone unpunished to this day.

The documentary is dramatic to the point of melodrama, and the English voice over is lugubrious, but these qualities have drawn excessive attention. None of us was ever bothered by heavy-handed depictions of the Nazis.

Reaction in the West has been mixed. Commenting on the style, the New York Times called the film ‘overwrought”. The Economist and the Toronto Sun praised the film. Somewhat callously, Slant magazine asked why we should care (about the millions murdered by the Soviet regime).

What makes me uneasy in the discussions about the film is the elephant in the room, namely the holocaust. Had the Soviets not fought on the East, so many more Jews would have died. How does that play in our understanding of the Soviet regime?

Many non-Jews from Eastern Europe believe their story hasn’t been told, and when it is told, we are asked by critics such as Slant magazine, why anyone should care. The same question was posed of Martin Amis‘s novel and non-fiction on the same theme, Koba the Dread and The House of Meetings.

I have heard articulated but never read a variation on the why we should care question that contends these anti-Semitic regimes of Eastern Europe got what they deserved. The Late Lucy Dawidowicz, one of whose books I recommended in my last blog, apparently accused the historian, Norman Davies, of minimizing Polish anti-Semitism.

Since I am not a historian, I can’t make definitive statements about these controversies except to say that all victims deserve to have their stories told.

The Lithuanian-Canadian geographer, Laimonas Briedis, reminded me over dinner that one could accommodate oneself to the Soviets and be saved, while the Jews were never given such an opportunity by the Nazis. (This statement deserves more study – the enemies of the Soviet regime who were herded onto boxcars were given no opportunity to accommodate themselves).

My particular interest is postwar East European anti-Soviet partisans. Hardly anyone has written about them and what has been written, in books such as the Soviet Vanagai is Anapus, consists of myth and obfuscation.

But in order to understand, we have to keep on caring.