This transcript of ruminations on the twentieth century by a pair of first-rate minds is not only a fascinating read but also a poignant document because Tony Judt was dying of ALS during the book’s composition and he was looking back on his life and ideas – it’s a kind of summing up by one brilliant and thorny historian as spurred into existence by another, younger one. 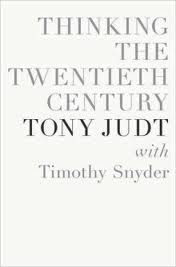 Tony Judt became prominent in the public mind for Postwar, a overview of that period after WW2. He subsequently became controversial for an article about Israel in the New York Review of Books. Timothy Snyder has become increasingly prominent over several books, and developed into a bestseller and game changer for Bloodlands, a history of the lands occupied by both Stalin and Hitler.

While there is much to say about each historian, my particular interest lies in their focus on central and Eastern Europe. I became interested in Judt because he wrote that Paris 1968 seemed to him to be the most important event of its time, and he only later came to realize it happened at the same time as the invasion of Czechoslovakia, which flew under the radar for most pubic intellectuals. The multilingual Timothy Snyder, of course, has focused on Central and Eastern Europe for a long time.

The book is courageous in many ways because it takes on topics that I never considered before, such as the ideas of fascist intellectuals. Fascism is so discredited (and rightly so), it barely occurred to me that were “intellectuals” in the camp. Who would dare to discuss Fascist intellectuals in Canada?

For that matter, who in Canada would come out swinging as much as Judt does, taking swipes at others such as Norman Davies, himself a great specialist on Central and Eastern Europe, for undue insistence on the importance of Poland in European history, and Michael Ignatieff, among others,  for his support of the Iraq war?

Part of the reader’s pleasure of reading this text is the pleasure Judt himself takes in attacking not only individuals but trends as well. He is particularly sharp on the practice of teaching history through focusing on discrete moments because the method creates students who have lost their grasp of basic content. There’s nothing like watching a good scrap.

Anyone who is not a historian will find the range of references hard to follow at times. But reading the book is like having two of the smartest people you know over to dinner, and listening with delight as their minds range across the century. You might want to take notes for names to look up later or you might just want to sit back and let the whole thing wash over you. One thing is certain – you will yourself be more intelligent after you finish the book than you were before you read it.  And even if that’s not really possible, at least you will be better informed.