The fraught subject of the Holocaust in Lithuania is addressed and broadened by two new books from The University of Nebraska Press, a house that specializes in nonfiction and whose books are available in Canada.

The first is Epistolophilia, the second biography by Montreal writer Julija Sukys. The book traces the life of an uneasy heroine, Ona Simaite (1894-1970), a Vilnius librarian who gained access to the Jewish ghetto while claiming she was going in to retrieve overdue books. On at least one occasion, she smuggled a girl out of the ghetto in a book bag. On other occasions, she brought in food and medications. 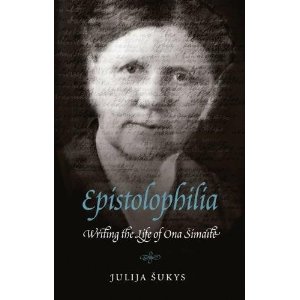 Simaite was caught by the Germans, tortured, and imprisoned in a concentration camp, but managed to survive and lived the rest of her life in France as a stateless person, corresponding with a wide range of intellectuals. She never seemed bien dans sa peau, but her uneasiness led to a wealth of musings on books and life.

If the life of Simaite is incredible in itself, the writing in this book is exceptional as well. I first found chapters of it published in the Baltic journal, Lituanus, and was so taken by the quality and intelligence of the prose that I looked up the author to find out when the biography was coming out, and have been waiting expectantly ever since.

My own enthusiasm is echoed in Publisher’s Weekly, which gave the book a coveted starred review.

While looking through the catalogue of the press, I stumbled across another exceptional new book called We Are Here, Memories of the Lithuanian Holocaust, by Ellen Cassedy.

She is an American writer of mixed Jewish and gentile origins who went to Lithuania to study Yiddish and recover the history of her mother’s life, as well as that of an uncle who had been a Jewish policeman in the ghetto in Siauliai. 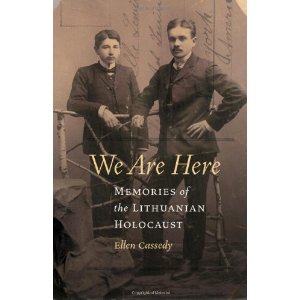 What’s so remarkable about Cassedy is that she is something of a detective, interviewing everyone she can about what happened to the Jews and to the Lithuanians as well. She meets an old man in Rokiskis, who feels a need to unburden himself by describing the murder of Jews, which he witnessed decades before, and she speaks to surviving Jews as well.

But she doesn’t stop there. She digs through archives herself and hires others to do so too. She explores the idea of the bystander, the Lithuanians’ grief of their losses under the Soviet period and above all the great tragedy of the Holocaust with a fine sifting of history, circumstance, ambiguous morals and selective forgetting.

What’s so satisfying about this book is that it declines to argue from a fixed position. If I can polarize the extremes of the discussions on the Holocaust in Lithuania (discussions, often heated, that I have had in Vilnius streets, bars, and restaurants), on the one hand I hear accusation against Lithuania as a criminal nation which refuses to acknowledge fully the crimes of its people in the Holocaust and to compensate justly, insofar as possible, those who suffered at the hands of Lithuanian murderers. On the other hand, the argument goes that nobody knows about Lithuania and what it went through in the Soviet period and Stalin’s crimes were as great as those of Hitler (the double genocide debate, which remains a fiery topic).

Ellen Cassedy keeps on asking questions of the past and of those who choose to remember it in a certain way. To summarize her point of view would do an injustice to a book that probes the uneasy subject of moral action in impossible situations.

As an aside, I should add that neither of these books bears directly on my next novel, set in Lithuania in the twenties, but that project is moving slowly while I prepare for a creative writing conference in Toronto in May, and so in snippets of time, I read about the place, and when I am lucky, I come upon books such as these.